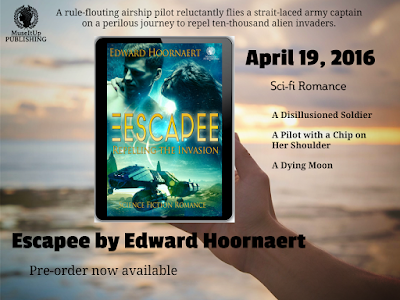 The African Queen in Outer Space?

My upcoming science fiction romance, Escapee, is coming out on April 19. What inspired me to write the book?
The 1951 movie, The African Queen

. My version is set on an inhospitable moon, rather than the African Jungle, but in both tales the hero and heroine battle nature and, ultimately, the invading enemy.
How did I transform a movie into a science fiction romance?

I rented the movie and looked for two things:
I then devised analogous stages and turning points for Escapee. Here are a few of them, so you get the feel for how the analysis worked.
Stage 1:  Polite disconnect between hero and heroine.
Turning point:  The enemy invades. In AQ, it's the Germans, who leave Rosie alone and stranded -- until Charley comes by and saves her.
In Escapee, it's humans from the Proxima system. While Hector's on leave, they destroy his entire command, leaving him stranded and alone -- until Catt lands, looking for survivors.
Stage 2:  Rosie devises a near-impossible goal that he doesn't agree with.
So far the two stories are similar. Now they start to diverge, though the skeleton remains the same.
Turning point:  When mild danger fails to deter her from her purpose, his true feelings come out explosively.
·         In AQ, after shooting rapids doesn't deter Rosie, Charley gets drunk and insults Rosie. She dumps out all his rum.
·         In Escapee, after getting caught in a volcano's updraft doesn't deter Hector, Catt sabotages a cannon stored in the airship's hold.
Stage 3:  Futile attempts to rebuild a civil relationship.
Turning point:  He agrees to share her goal.
In AQ, Charley's (deeply buried!) chivalry makes him give in.
In Escapee, Catt remembers all the friends whom the enemy has killed. Hearing her cry during the night, Hector finally talks, voicing his idealistic reasons for wanting to fight. Inspired by his idealism, Catt agrees to make the dangerous voyage to the other side of the moon.
Stage 4:  Falling in love
Etc, etc.

"Inspired By", Not a Ripoff

This post is getting long, so I won't bore you with all six stages, but hopefully you get the general idea. Analyzing the movie turned out to be a huge help in developing my plot. You ought to try it some time.
I'd like to emphasize that Escapee ended up having a different feel than the movie. Here are some of the key differences:

What's It to You?

If you have a favorite movie you love, you might want to turn it into a book of your own. If so, consider analyzing it for stages and turning points.
What movie would you like to turn into an "inspired by" novel? Tell us about it in the comments.
PREORDER ESCAPEE NOW ON AMAZON: http://amzn.to/1WAxssv
Release Date: April 19 2016 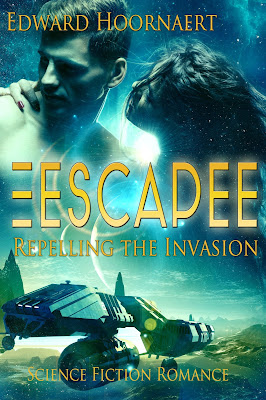 What kind of man writes romance? A man who married his high school sweetheart a week after graduation and is still living the HEA decades later. A man who is a certifiable Harlequin hero in his own right -- Ed inspired Vicki Lewis Thompson’s Rita Award finalist Mr. Valentine, which is dedicated to him.


Ed started out writing romances for Silhouette Books, but these days he concentrates on science fiction romance. In addition to novelist, he’s been a teacher, principal, technical writer, salesman, janitor, and symphonic oboist. He and wife Judi live in . They have three sons, a daughter, a mutt, and the world’s most adorable grandson. Visit him at http://eahoornaert.com.
Posted by Unknown at 10:54 AM