Drinking my coffee, going through a ton of email & social media crap, I happened upon an email from Amazon.  The Associates Operating Agreement has changed.

Now normally, this would bore me to tears, and I would probably ignore it for the moment. I don't really make any money as an Associate.  I'm in the business of selling my books as a publisher (Indie).

So I clicked on it anyway, and it had some seemingly innocuous stuff about counting up items sold and the kinds of items.  As you may know, the number and type of items sold affects your Associate's commission.

Then I noticed a section about FREE ebook promotions:

Again, this doesn't really affect me.  I don't worry about selling other stuff through Amazon.  But then it occurred to me who it might affect, all those wonderful websites that promote FREE kindles.  I use those websites weekly to promote my FREE novel The Nightlife New York, the first in the Nightlife Series.

These freebie sites don't make money from free books.  They sell ads. But they do make a fair amount of Amazon Associates commissions from people entering Amazon to catch a free ebook, who then shop for something else. If all these free kindle sites can no longer collect Associates commissions because they are disqualified by virtue of promoting free kindles, can they afford to stay in business based on their ad sales alone?

I have a strong suspicion the promotion of free kindles is about to see a severe drop off.  It kinda looks like maybe Amazon is shooting themselves in the foot.  Many people who enter their system via a freebie site, who pick up a freebie, go on to shop for something else.  It's a logical procession that less freebie promotional sites = less downloads of freebies = less impact of free promos = less sales boost to novels, and less sales of other items through impulse shopping.

I suppose I can understand Amazon might think its unfair that guys promoting free stuff can make a commission from other stuff just by virtue of a simple link.  But then I realized this is the fundamental basis of Amazon's Associate Program, when someone enters via your link, you get commissions for anything they buy.

Not really making sense anymore.  Not to me.  I'm sure there's a department of bean counters somewhere in Amazon who thought it made sense.

Now we could do the conspiracy theory thing: It's a conspiracy to smack down all those upstart Indie authors who were making huge leaps and gains competing against traditionally published novels via free promos.  I'm not going there.  Not yet anyway.  But it kinda begs the question....

It will be interesting to see how this affects free kindle promotion.  It most certainly will be negative for us Indie authors, indirectly.

The Nightlife Paris needs your vote on cover art!

I have a wonderful cover artist:

She's highly talented and very fast, efficient, and professional. She did all three of these covers in two days!  If she wasn't all the way over in Europe, I would track her down and kiss her!

My problem?   I can't decide which of the three covers is the best one.  They are all so damn awesome.

HELP ME DECIDE!  Please vote for one of these three covers on my Goodreads poll: 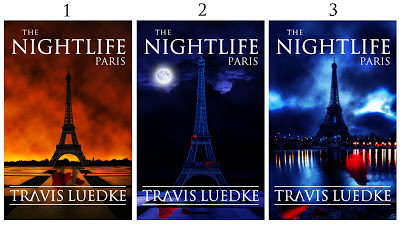