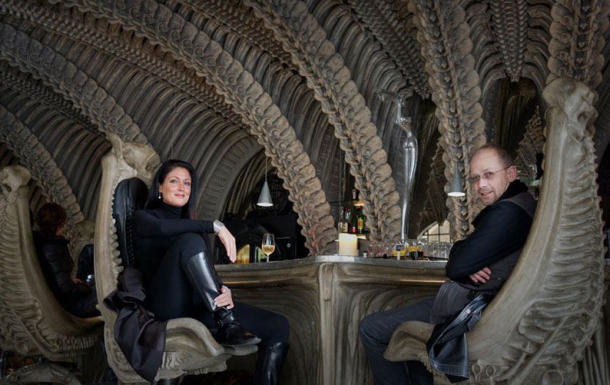 Here's all the places we'll be visiting durning the Supernova Hotness week of the blog hop with the SFR Brigade:

In my cafe, as we dine among alien artifacts, we appreciate the finer qualities of aphrodisiac liquor distilled for concubines of the Gran....

Instead of striking me or chastising me as I expected, he clicked approval and grabbed another bottle of liquor from his cabinet. He poured my glass full once more. After the fifth cup, I felt nothing. No desire for Cesar. No need for Cesar. No desire to be rid of this tall, furry, striped son-of-a bitch with his huge cock swinging in front of my face. I felt nothing but a floating haze of inebriation.
Liquor was the answer to my problems.
After the sixth cup, I’d was a grinning fool who could barely stand, perfectly content sprawled across the Captain’s lap, my cheek rested against his thick, warm cock. There was something about his gloriously large cock that made me happy, even though I’d never get it inside me.
I buried my fingers in the fur of his thighs, giggling and enjoying the feeling of his powerful musculature. I rubbed my face against the soft fur on his chest. I knew what he wanted, the same thing every male wants. Instead I teased him and avoided his ever-hardening cock. When I tried to stand up I fell over and found myself whisked into his powerful arms. He laid me out on his couch-lounger and hovered over me, a look of satisfaction on his face.
“I understand you, Angel. I know you are pained by the loss of your men. For this reason I forgive you … this time.”
He unzipped my suit and I did not fight him. He stripped my one-piece off and all I could do was giggle. He grabbed my knees in his clawed grip and squeezed hard enough to draw blood. The pain brought more trickles of euphoria and a smile to my face. It didn’t matter if he wanted to hurt me. He’d already destroyed me when he took me from Cesar. Physical pain was nothing more than pleasure to my twisted nervous system.
Bleeding and smiling, I curled up naked in his arms, loving the sensations of his slippery, soft fur on my skin. I had to face the fact this was my place, right here, playing pretend for the Captain. If I couldn’t be with Cesar, I had to try to salvage a future.
I had to accept the harsh truth: I was not made to be loved. Who could love a thing designed in a laboratory, an experiment? No love for Angel. But I could still have fun. Lots of fun.

With Cronin’s ship cruising double-time to reach the jump site at the outer edge of our solar system, I found my fellow concubine curled into a ball, passed out on the couch in her cabin. Chilla’s beautiful green-striped fur had bloodstains from a recent round of punishing sex with Cronin. If there was a hell for Cats, that son-of-a-bitch Cronin had a special corner dedicated to him.
Seeing her miserable condition lit fires of fury in my veins. My hands shook with the intense adrenaline rush, the need to lash out and hurt someone. If he fucking came near me, I’d probably break his claws off one a time and use them to castrate him.
He tried to enter our cabin a few hours later, without permission or warning. I kicked him so hard in his fat, fist-sized balls that he puked all over the hallway as I shoved him back out the door.
Chilla moaned from the couch. “If I deny him, he will short my payment.”
“And if you’re dead, how will you collect your money?”
She didn’t argue that one. Concubines had died servicing males who lost control while high on amixa. She’d admitted as much, and I feared she’d end up like one of her lost sisters, dead on the floor, fucked and mauled to death.
Chilla’s thighs showed deep scarring from the many times she’d been mauled during sex with males high on amixa. Her nanomed cream healed her wounds in a couple days, but it didn’t get rid of the scars. That cream she used religiously was the only reason she’d survived this long.
The Captain and I couldn’t really have sex, and he didn’t do any permanent damage to me. Though his massive cock didn’t fit me, he was creative with his games of pretend. Luckily, my skin healed in hours without a mark. I could serve him well enough to keep him away from Chilla until she recovered.
Cronin waited a few hours before he knocked on our door with a polite growl, requesting entry. I hoped his balls were too sore to get it up and enjoy his drug addiction. Chilla, the fool, answered the door and let him in. The stupid female worried she wouldn’t get paid if she refused him service.
Though I wanted to crush his swollen testicles in my hands so I could watch him mewl and puke, I volunteered to service him, to keep him off Chilla for another day. Like a good little concubine I followed Cronin back to his cabin. He laid out the bottle of spiced amber-colored liquor with little spongy squares of spice cake –Angel treats – and watched me strip off my one-piece suit. The Cats, specifically Cronin, preferred I wear the clothing of a female Cat – a barely there bra, and a belted skirt thing that left my legs, thighs and most of my ass bared. My zipper suit was quickly discarded as the Captain brought out my new outfit, another facet of his pretend routine.
Standing naked before this massive male, with a swinging dick as long as my arm, I was glad for the liquor. The potent aphrodisiac liquor allowed me to perform for this motherfucker, instead of killing him like I wanted to. He bent me over, sprayed amixa on my back and ass, and rubbed his monstrous cock between my thighs, pretending to fuck me. With the heavy meat of his erection rubbing my inner thighs and pussy raw, I knew somehow, some way, I’d make him pay. If not for all he’d done to me – for Chilla.

Join Angel 6.0 in her struggle to survive as a concubine to the Gran:
http://smarturl.it/Angel6Series1

And don't forget about the AWESOME GIVEAWAYS!

Enjoy your time among the stars, and don't overdo it at the bar, that aphrodisiac liquor packs a wallop. You just might find yourself enslaved to a warlike race of alien Cats... 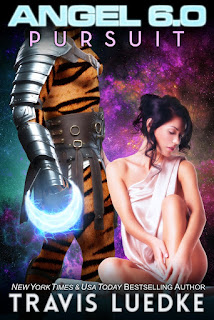 Enslaved to a Catlike Alien race of Warriors, Angel is whisked away to the far side of the galaxy. Experience her struggle to survive captivity as a concubine pursued by the Prince of the Gran, space pirates, and the Captain who owns her.
Goodreads: https://www.goodreads.com/book/show/25653845-angel-6-0
Amazon: http://smarturl.it/Angel6Pursuit 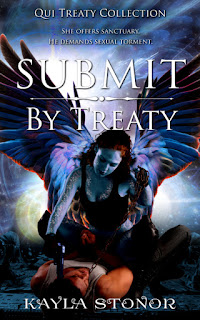 Zeus, an elite soldier and prisoner of war, struggles to regain sanity with the help of Commander Meseri, a winged angelic shapeshifter who bares a striking similarity to the enemies who tortured Zeus.
Goodreads: https://www.goodreads.com/book/show/25654012-submit-by-treaty
Amazon: http://smarturl.it/SubmitByTreaty

Join Travis Luedke and Kayla Stonor for an out of this world celebration with guest author appearances, giveaways, games, prizes and more!

Posted by Unknown at 7:51 PM No comments: