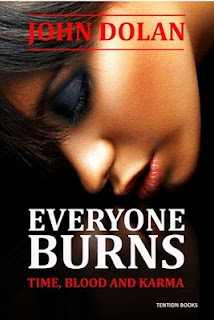 Everyone Burns by John Dolan, FREE ON AMAZON US
May 29th--June 2nd 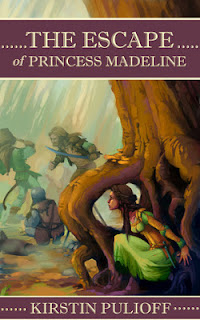 The Escape of Princess Madeline by Kirstin Pulioff, FREE ON AMAZON US
May 29th--May 31st 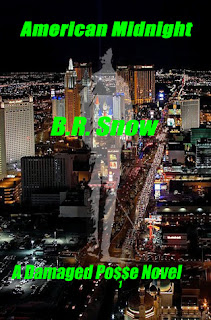 American Midnight by B.R. Snow, FREE ON AMAZON US
May 30th--June 1st 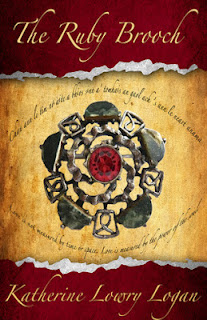 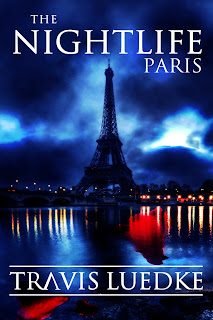 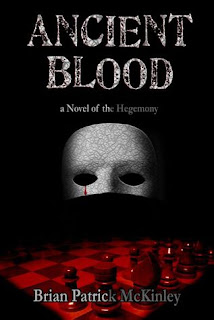 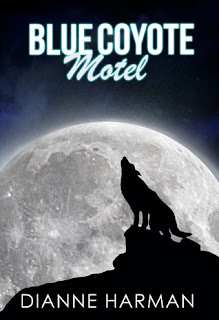 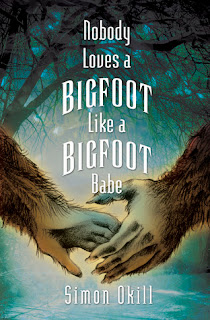 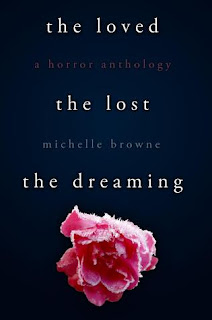 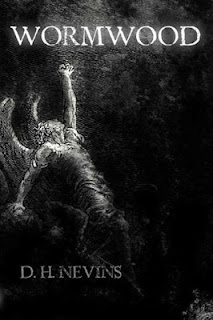 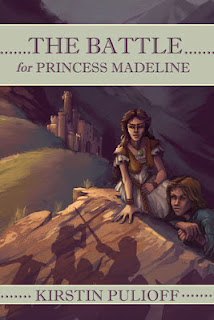 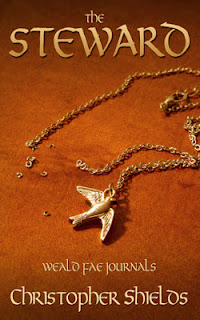 a Rafflecopter giveaway
Posted by Unknown at 12:51 PM 39 comments: 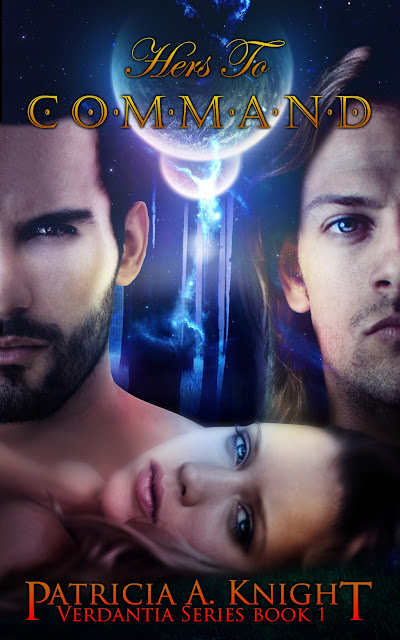 Conte Camliel Aristos deTano, Ari, has long spurned the marriage forced upon him. His contractual bride, Princess Fleur Constante, the beautiful future queen though young and inexperienced, is willing to risk everything, including her own sanity, to save her planet.

The inhabitants of the sentient planet, Verdantia, are poised on the precipice of extinction following a brutal invasion by an off-world, nomadic horde. Verdantia’s capital, Sylvan Mintoth, must have its failing energy shield restored, or the planet is doomed. The Elders know the shield can draw energy from only one thing ~ a very arduous and grueling coupling of two specific people who were pre-chosen by the planet Herself and promised by prearranged marriage contract.

Verdantia draws strength from the duo, but the sentient planet whispers to Ari that a third is necessary ~ Ari’s aide de camp, Visconte Doral deLorion, an angelically handsome, skilled assassin who silently surrendered his heart to Ari long ago.

The trio struggles to make this surprising partnership harmonious, pushing through pride, scars of past abuse, fears of inexperience and distrust. To save Verdantia, they must overcome their individual weaknesses and realize their full potential. Only the Tetriarch and their combined synergy, can harness Verdantia’s immense power to shield its citizens from invasion.

Be part of the Tetriarch! Get your copy today at the promotional release price: $2.99!

(Price is going up in a few days)

What reviewers are saying about HERS TO COMMAND:

★★★★★ "Verdantia and its cast of characters are presented as living, breathing three-dimensional props that support not only the reason for the very heated intimacy, but also a story and world that has a long standing history, a complex present and an uncertain future."
★★★★★ "Patricia Knight seamlessly weaves a whole new world, society, and culture through tantalizing, steamy scenes that make a woman yearn to experience a man (or two)..."
★★★★★ "This book was so much fun ~ and such a wild ride, can I go again?"
★★★★★ "Made me regret being at work while reading. Talk about steamy."

Patricia A. Knight is the pen name for an eternal romantic who lives in Dallas, Texas surrounded by her horses, dogs and the best man on the face of the earth – oh yeah, and the most enormous bullfrogs you will ever see. Word to the wise: don’t swim in the pool after dark.

I love to hear from my readers and can be reached at http://www.trollriverpub.com/ or  http://www.patriciaaknight.com. Or send me an email at patriciaknight190@gmail.com. Check out my latest “Hunk of the Day,” book releases, contests and other fun stuff on my face book page: https://www.facebook.com/patricia.knight.71619


If you enjoyed Hers To Command, look for Sophi DeLorion’s story, Hers To Choose, coming out in mid-July 2013 and Steffania Rickard’s tale, Hers To Cherish coming in early August, 2013.

Since then we did the mutual Facebook-Twitter timeline stalking, and snooped around each of our blogs – the social media equivalent of dogs sniffing crotch.

LH: “Most elegantly put there, Travis! Well, as you mentioned, we had quite a fascinating discussion before about the possibility that male authors are discriminated against, so when you offered to interview me, I thought it might be interesting. I hopped on a plane, came all the way here and now look at me!” 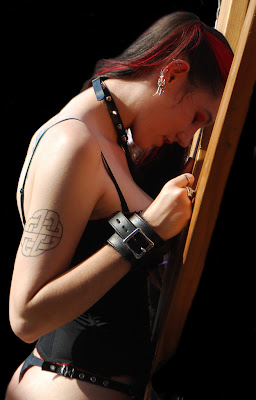 (Liv shakes her hiney to test her restraints)

“I walked in the door and, without so much as a by your leave – never mind a ‘hello’ or a ‘would you care for a cup of tea’ - two burly men grabbed me, removed most of my clothing and tied me to this… what is this? I know we’re all erotica writers together and so on, but dammit, I’m British!”

TL: “Yeah, perhaps you should have familiarized yourself with my own peculiar style of interview before you came?”

LH: “It appears that I should have. Well, I’m here now and I don’t appear to be going anywhere.”

TL: “Count yourself lucky I only had the guys grab you. The last one I drugged with ketamine, and she woke up like this.”

LH: “Oh. Dear me. Well, I’d much rather you did it this way, if you insist, rather than drugging me with ketamine or goodness knows what else.”

TL: (Sighs in resignation) “Disappointing, but we’ll have our fun nonetheless.” 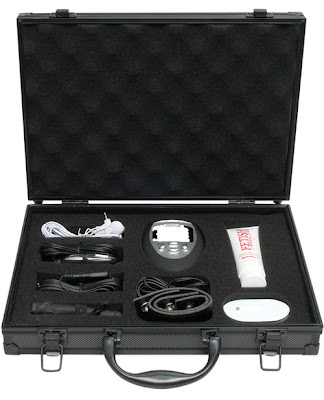 (TL pulls a small black briefcase from a drawer)
TL: “This is what’s known as electrostim or electrosex. It’s supposed to be pretty fun. For one of us anyway.” (TL squeezes open the little jaws of the electrode clamps, chomping them in her face) “I’m going to hook these little clamp electrodes here and here on each nipple.”

LH: “Ouch! Those have teeth!” (Liv squirms and grits her teeth in pain) 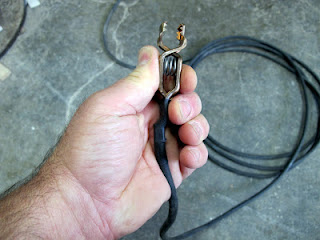 TL: “That they do. Need a good solid bite for the current.” (TL twists a little with each clamp)

LH: “Ow! Don’t!” (TL twists some more and then licks each nipple softly) “Well … Okay I guess you can do that. You did say I am getting paid for this interview.”

TL: “You like a little pain? The last clamp goes down here …” 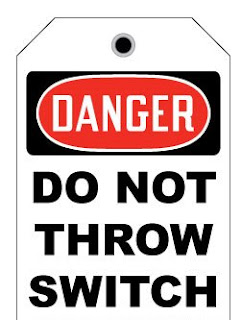 TL: “Love hearing the accent, very sexy. Does it hurt yet? I don’t think I’m using enough juice.” (TL turns it up a notch)

LH: “Ow! Shit! That hurts. And you haven’t even asked me any questions yet. Can we talk about how much I’m being paid for this interview? You were a bit vague in your email. Does it bear any relation to how much you turn up that dial?”

(TL turns it off but leaves the dial setting)

LH: “Okay. My first story, Imagine, was published last year by Silver Moon Books, and my new book is called Coming, Ready or Not: Three tales of tease and denial. My latest work is the story of a couple, Will and Abby, developing a Master/slave relationship. It's about them learning together. There aren’t any billionaires in this one, no mysterious castles in the middle of nowhere; just two ordinary people, who could be anyone you’d see walking down the street, but who are in an M/s relationship. With the humour, the laughing, the fact that it isn't perfect, sometimes things do go wrong, and with the best will in the world you can't always obey, however much you want to, and there are consequences that come with that. And there’s not one scene of electrosex. (LH wriggles) But Travis, I don’t think you’re doing it right. It’s not supposed to hurt, is it?”

(TL switches it off with an evil grin of satisfaction)

TL: “I read the instruction manual. I know what I’m doing. See right here on the label it says ‘Electric stimulation can be painful and even deadly if performed in an inappropriate or unsafe manner’. Now where were we? You were telling us about your non-electrosex erotica novels? Please continue.” 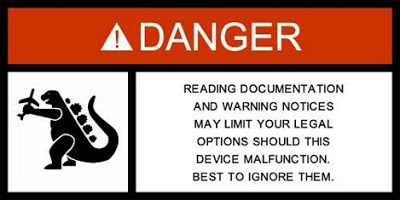 TL: “Really? That’s what you’re going with? Think you’re in a good position to sass me?”

(TL turns the box back on)

TL: “I should think so. Now, you were saying. About your book?” (TL turns off the box)

LH: (Panting to catch her breath) “The… the book shows Abby being teased right to the edge of orgasm and kept there until Will says otherwise. She wants to obey him, wants to hold on, but can she? And what will he do if she can’t? I’m also delighted to be able to show off my new cover by the wonderful Blue Harvest Creative.” 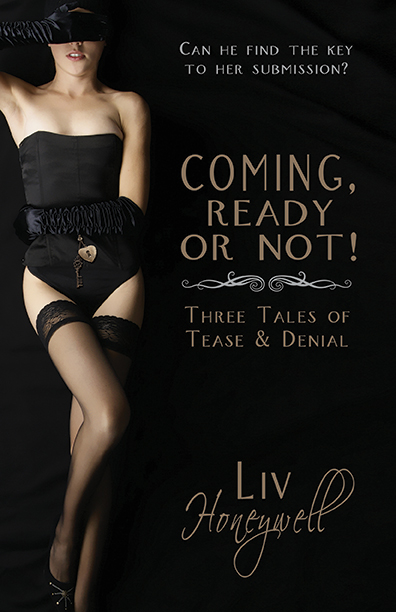 TL: “Interesting! Giving me ideas, Liv. Great cover, too. Oh yeah. And, one more thing, while I have you here, what were you saying about male erotica authors encountering discrimination? Surely you’re not disagreeing with me?”

LH: “Well, actually, when I ran a discussion on my blog about it, most of the women who commented said they’d be really interested to read more male …”

(TL flips the switch and watches her convulse, squirm, and squeal as he turns it up two more notches)

TL: “I knew I was right.” (TL smiles and reaches into the black case for another toy) “Do you smell that? I think that’s the scent of burnt nipples.”

LH: (Liv groans) “What are you doing now?” (LH squirms, craning her neck around to see what TL is doing as he steps behind her)

TL: “Yes, that’s right. Now let’s see just how much power this thing can put out before the batteries go dead.”

TL: “Now, when’s the book out? And tell me how everyone can get a hold of you or you will be sorry!”

(LH glares at Travis and then speculatively eyes the two men still guarding the door.)

LH: “Hmmm, I don’t suppose there’s any possibility I could keep one of them instead? Wherever did you get them from? Did you borrow them from Ellora’s Cave?”

TL: “We can discuss that later. When I’ve finished interro… I mean, interviewing you.”

(TL reaches into another drawer with a wicked grin)

LH: “Uh, hang on, what are you doing? I didn’t sign up for this. No, I’ve already told you everything! I really have.” 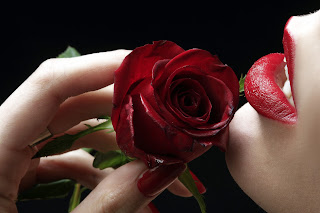 When not writing about delicious, hot male dominants and the female subs who love them, I’m usually doing something craft-like, reading, baking, eating the results of said baking, and attempting to satisfy the demands of His High and Mighty Dominance (the cat!). My first story, Imagine, was published with Silver Moon Books last year and Coming, Ready or Not will be published May 30th.

The Dangers of Overindulgence 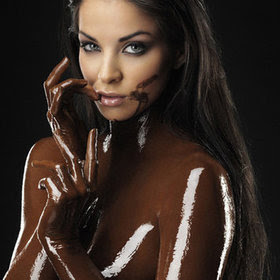 The Dangers of Overindulgence

A prescription for a lean, mean manuscript.

There are empty calories for people and there are empty calories for manuscripts. For people there are foods that only up the fat or sugar content while providing no nutrients. For manuscripts, there are words that add nothing to the vitality, exposition or description of a manuscript and should be eliminated -- or like chocolate, indulged in sparingly. Here are some of my favorites:
The above list is an incomplete, generic list of words that are the potato chips of the writing world. Empty description, no nutritive value. I am certain you can add to this list. Eliminate or reduce their use.

So make selective word choices and eliminate the empty calories.

What are your favorite empty words?

Next week: What did you say? Those pesky dialog tags.

Patricia A. Knight is the pen name for an eternal romantic who lives in Dallas, Texas surrounded by her horses, dogs and the best man on the face of the earth – oh yeah, and the most enormous bullfrogs you will ever see. Word to the wise: don’t swim in the pool after dark.

I love to hear from my readers and can be reached at http://www.trollriverpub.com/ or  http://www.patriciaaknight.com. Or send me an email at patriciaknight190@gmail.com. Check out my latest “Hunk of the Day,” book releases, contests and other fun stuff on my face book page: https://www.facebook.com/patricia.knight.71619


If you enjoyed Hers To Command, look for Sophi DeLorion’s story, Hers To Choose, coming out in mid-July 2013 and Steffania Rickard’s tale, Hers To Cherish coming in early August, 2013.