I met Steven Ramirez in the same place I meet most people, Twitter and Facebook.  We chatted about books and upcoming novels.  He offered to let me read his new novel, TELL ME WHEN I'M DEAD, a phenomenally well-written zombie thriller novel.  And, I'll let you in on a secret, this is probably the first book in a series....

And so here it is, my review of TELL ME WHEN I'M DEAD by STEVEN RAMIREZ: 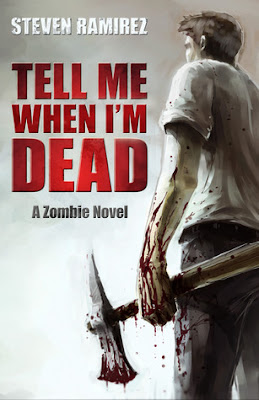 Lucky to have made it to his early twenties, Dave Pulaski wandered through life lost and drunk with his best friend Jim.

Then came Holly. She made it her mission to clean him up. And he finally did it. Two years sober, Dave has plans for a family, a steady job and college.


One night Jim disappears, leaving a grisly trail of animal carcasses and murdered bodies. Now Missy, the woman Dave cheated with, threatens to destroy not only his marriage but his sobriety. Between Missy’s jealous demands for attention and the police investigation focused on Jim’s disappearance, Dave’s neatly ordered world quickly spirals out of control.

Amid the wreckage of Dave’s personal life, a contagion brings chaos to his hometown of Tres Marias. The condition, known as “the jimmies,” infects hundreds and kills quickly. But the dead find no rest. They rise as ravenous flesh-eaters.

Dave soon learns that “not all draggers want to eat your flesh, some want revenge.” And Jim and Missy, both infected, each want something from Dave.

The quarantine of Tres Marias creates hell on Earth. Badly outnumbered security forces are no match for the growing hordes of undead.

Follow Dave, Holly and a small band of heavily armed soldiers and civilians as they fight to survive looters, paramilitary nut jobs and the zombie apocalypse.

If the zombies don’t kill them, the wackos surely will. Nowhere is safe.


Grab your copy of this insane new adult zombie thriller Tell Me When I’m Dead now!

Revenge of the zombie ex-girlfriend - an instant cult classic  ★★★★★

Steven Ramirez brings on a hard-hitting splattergore zombie thriller, told by the ultimate anti-hero, Dave. Dave's not brave, he's not honorable, he's not a muscle-bound MMA fighter or an ex-military sniper. He's a recovering alcoholic, with a past that just won't quit.

The one thing you learn about Dave, he's good with an axe.

Dave had it all going for him, Holly - the perfect wife, a good job at Staples, clean and sober, dumped his loser drinking buddy Jim. Two years without a relapse, and he had built a real life for himself. But Jim won't leave him alone. Jim doesn't know when the party ends.

Then Jim got the jimmies, and now he's a flesh-eating zombie.

And like many men who live with alcoholism and instant gratification, Dave couldn't settle for his perfect life with Holly, he had to get a little on the side with Missy. The zombie apocalypse comes home in a personal way for Dave, first with Jim and then Missy.

It's the zombie ex-girlfriend straight from hell. Missy doesn't just want revenge, she wants to eat him alive, starting with the soft, mushy underbelly, where all those yummy guts are found.

Every zombie knows it's the belly that's the most delicate part of the body.

Guts and gore and death galore.

This zombie apocalypse is set in a home town environment, where you personally know each of the 'draggers' who are dying to eat your guts.

And if the draggers don't kill you, the militant, survivalist whackos will. Pandemonium and martial law equals survival of the fittest. No one can escape the quarantine zone and the widespread madness overtaking the survivors.

"People talk about survival. What they mean is killing the other guy."

And that is precisely what it takes to survive in Dave's hometown of Tres Marias. Don't hesitate to dive into this novel for your dose of splattergore-thriller-horror, and perhaps you'll learn a few things about human strength and frailty under duress.

Goodreads | Tell Me When I’m Dead—Chapter 1 “In the Shit” by Steven Ramirez http://bit.ly/14YorRD
Posted by Unknown at 8:22 AM